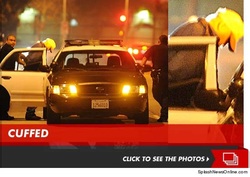 The man arrested outside Lindsay Lohan's house in Venice Beach yesterday was old enough to be her dad ... at least according to several pics taken of the man in handcuffs.

The photos were snapped yesterday around 6:30pm outside Lindsay's pad -- where the white-haired man was arrested for trespassing.

TMZ broke the story ... cops were called to Lindsay's house after the man knocked on her front door, demanding to speak to the actress.

Lindsay refused to open the door. Cops showed up soon after and handcuffed the guy. He's still in custody

A key attorney in the fight for Christian and family values in California’s trend-setting school system warns his state’s teacher’s union is about to begin its “next major push” in the cultural battle over homosexuality in schools.

“‘Gender liberation’ will likely be the new vogue term used to describe the tidal wave that is fast approaching the shores of the California public school system,” writes Robert Tyler, founder of Advocates for Faith & Freedom, a non-profit law firm dedicated to protecting religious liberty. “And you can be sure that it won’t stop there. It will spread throughout the nation and have disastrous consequences on the innocent.

Tyler’s law firm represents students and parents in a number of cases in California, including former high school student Chad Farnan, who brought suit against his history teacher for regularly ridiculing Christianity in class, including making the statement, “When you put on your Jesus glasses, you can’t see the truth.”

Tyler argues that the 325,000-member California Teachers Association “has allied itself” with radical homosexual activists and says he has uncovered evidence of how the CTA is pushing teachers to take the next step in “brainwash[ing] children into believing that gender neutrality is ideal for society.”