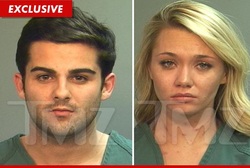 Denise Brown -- who became famous after OJ Simpson killed her sister, Nicole Brown Simpson -- is now in the eerie position of dealing with domestic violence again, and this time the alleged perpetrator is her son.

Sean Brown and his live-in girlfriend, Amy, were arrested at their home in Orange County, CA, for felony corporal injury on a spouse.  Law enforcement sources tell us they received a call at 2:30 AM today, responded to the scene and noticed visible marks on both parties.

Both are currently in custody.

(Reuters) - The White House plans to ask Congress by the end of the week for an increase in the government's debt ceiling to allow the United States to pay its bills on time, according to a senior Treasury Department official on Tuesday

[Alleged] President Barack Obama is expected to ask for authority to increase the borrowing limit by $1.2 trillion, part of the spending authority that was negotiated between Congress and the White House this summer.