KOBE BRYANT Not as Rich as You Think

TMZ has learned ... contrary to news reports about Kobe Bryant's wealth -- the BBaller's net worth is approximately $150 million, according to sources in a direct position to know.

Sources intimately familiar with the situation tell us ... the $150 mil accounts for real estate holdings, stock, cash and other assets.

The figure is far less than news reports which set Kobe's fortune north of $400 million.  But the $150 mil figure is the accurate one.

TMZ broke the divorce story and the fact that Kobe and Vanessa DO NOT HAVE A PRENUP.   Given that the marriage has lasted more than a decade and the pre-marriage assets are commingled with what was accumulated during the marriage, the assets are distributed based on the community property laws of California -- which means a 50/50 split.

Kobe and Vanessa have already struck a financial settlement, but she was in a good position to get half of the pie. 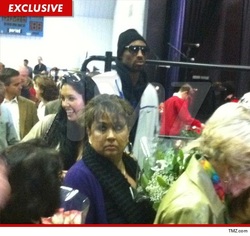 Kobe Bryant and his soon-to-be ex-wife Vanessa attended a Christmas recital for their kids just hours before TMZ broke the news the couple was getting a divorce.

Kobe and Vanessa (above, smiling) were spotted together Friday morning at their daughter's school for a musical both of their children appeared in.

Our spy says Kobe and Vanessa next to each other during the show and left together in the same car, but their moods were totally opposite -- Vanessa was chatting with friends and having a good time, while Kobe spoke to no one and appeared "somber."