Metallica to make a 3d movie - details inside 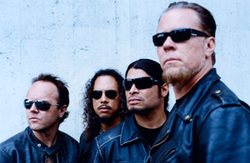 Metallica have announced more details about their upcoming 3D movie. Most important, they are hiring award-winning director Nimród Antal to direct. The film will be a marriage of narrative and concert and will star the members of Metallica, as well as the fans. It will begin shooting this August and will be released in the summer of 2013. “I’ve been a fan of Nimróds since his first Hungarian film, Kontroll, showed up at Cannes in 2004 and blew everybody away,” Metallica’s Lars Ulrich said in a statement. “I’ve watched with excitement his career in Hollywood blossom over the last few years. Within five minutes of meeting him I was addicted to his enthusiasm, his take on the creative process and his ‘thinking outside of the box’ personality. Let’s get on with it!!!”

“Metallica has always been a huge part of my life, and it’s an incredible opportunity when we get to work with our heroes,” Antal said. “We are going to harness the powerful and almighty energy of Metallica’s live shows, inject a narrative into it, and shoot it in 3D to elevate the entire experience.”

Antal is best known for writing and directing the Hungarian-language film Kontroll (2003) that won several awards, including the Award of Youth at the 2004 Cannes Film Festival and the Gold Hugo prize at the Chicago International Film Festival. He also received a European Film Award Nomination for Best Director. His credits include Vacancy starring Kate Beckinsale and Luke Wilson, and Armored starring Matt Dillon and Laurence Fishburne. In 2010 he was hired by Robert Rodriguez to direct Predators featuring Adrien Brody

The family of a young New Jersey woman raped and murdered in 1976 is fighting to keep her killer behind bars, after a quirk in state law has allowed him to “slip through the cracks” and appear before a parole board next month.

Kim Montelaro was 20 years old when she was abducted at knifepoint from a popular shopping mall and forced into woods near the Pine Lake Swim Club in Washington Township, N.J., where she was left to die after being raped and stabbed six times in her chest.

Her killer, Christopher Righetti, a then-16-year-old high school student from nearby River Vale, N.J., was convicted of murder in 1977 and sentenced to life in prison, though he has appeared before a parole board five times since 1991.

In his last hearing before the board in 2009, Righetti was declared ineligible for parole until 2022. But two bills passed in 2010, during a lame-duck session of the New Jersey state legislature, allowed for prisoners, such as Righetti, to receive a new parole hearing every three years. The state legislature later repealed the law, but the 52-year-old Righetti is still eligible to appear before the 15-member board as early as next month, three years after his last hearing, according to an official with the New Jersey State Parole Board