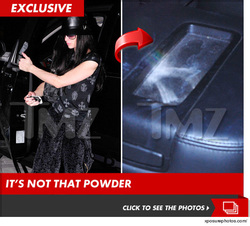 Paris Hilton was in the middle of a shopping frenzy the day after XMAS, when a nose-y photographer snapped a pic of the interior of her hybrid Yukon SUV ... which was partially covered with a suspicious looking white powder -- but don't jump to conclusions, because it's NOT cocaine.

We contacted Paris, who scoffed at the intimation it was blow.  She immediately sent us her own pic of the SUV's interior, which she says clearly shows it's a foundation from her makeup kit.

You'll recall, Paris was busted in Las Vegas last year for cocaine possession.  She pled guilty and was sentenced to community service.

JEREMY LONDON Will Be Charged For Alleged Baby Mama Attack

Jeremy London will be charged with domestic violence -- a month after the actor allegedly beat up his baby mama in Palm Springs -- this according to the Riverside County D.A.'s office.

As we previously reported ... cops were on the lookout for London to question him about the fight -- during which he allegedly injured his estranged wife Melissa Cunningham.

According to police, the ex-couple was fighting over custody of their son -- and London flew off the handle ... then beat a hasty retreat. London's lawyers have since been in communication with cops.

Now, a rep for the D.A. tells TMZ, the office has made a decision to charge London with one count of misdemeanor domestic violence. If convicted, London faces a year in jail.

A U.S. Marine veteran is recovering from a Craigslist transaction gone bad in which he was shot and then forced to plug the wounds with this fingers, benefiting from a military background that police say possibly saved his life.

"Thank God that I'm here," Lt. Col. Karl Trenker told ABC News' Miami affiliate WPLG-TV from his hospital bed in Florida. "I could very easily not have survived this."

Trenker, 48, had arranged to meet with a Craigslist buyer in Miramar under the name "Galven" who he believed was interested in buying a men's chain necklace his fiancee had posted on the online marketplace.

Trenker thought he was meeting the man in a well-populated plaza, but it turned out to be an apartment complex. He met two men outside on Dec. 21 and showed them the necklace.

"He just picked it up, looked at it and then just started running. I said, 'Listen, we can just drop this now. You set that thing on the ground, walk away, we're done. Police are going to be on their way in a minute,'" Trenker said.

Instead of dropping the necklace, the two men took off running and Trenker pursued them for several blocks before one of the suspects, Jeff Steele, "turned and fired several shots at him," according to a Broward County Sheriff's Office police report.

"I got shot. I didn't know I was shot as many times as I was shot," Trenker said. "I felt the one go into my chest and then one through my abdomen."

"I put my finger in the bullet holes, the big ones, and then I ran back to the car and I made sure the kids were OK and I told them, 'Listen, Dad's been shot. There's an ambulance already on the way,'" Trenker said.

Police said four of Trenker's seven children were in the car and witnessed the alleged robbery and the chase, but not the alleged shooting.

"He called me and said, 'Honey, I've been shot,'" Trenker's fiancee, Tanya Saiz, told WPLG. "I nearly fainted. He saved my life. That would have been me."

Saiz had originally been the one who was planning to meet the purported customer.

Trenker is amazed that after recently returning from a tour of duty in Iraq, he would be injured in his own hometown. "I can't believe this. I go to Iraq, I go to Afghanistan and here I am at home, shot," Trenker said. "It's inconceivable. I don't know how that they can put so little value on life."

Fiancee Saiz told WPLG, "He's been shelled with artillery and survived that, so for this scrawny, skinny little kid to come in and take his necklace, he didn't know the guy was armed.

"If there ever was a time to believe in miracles, this was it, because this was our miracle."

Moschella emphasized that authorities discourage people involved in robberies to pursue thieves. She said that is best left up to law enforcement.

"He could have been killed and that gold chain, of course, isn't worth your life," Moschella said. "This isn't your average victim. His good physical condition and military training may have helped save his life."

Within hours, police had arrested three suspects. Steele, 20, and James Flounory, 20, were each charged with one count of attempted murder and two counts of robbery with a firearm. The third suspect, Andre Gayle, 20, was charged with carrying a concealed weapon and possession of marijuana.

Flounory and Steele are in jail without bond and Gayle is out of custody.