Whitney Houston's funeral has only just begun ... but Bobby Brown has already left the church.

Rev. Al Sharpton tweeted just moments ago, saying, "I am at Whitney's funeral. I spoke with Bobby Brown trying to calm him down and not distract from the services. Today is about Whitney!" 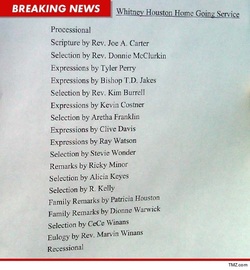 A list of people scheduled to speak during the "home going service" for Whitney Houston was just shown to the media outside the church ... but one famous name listed will be a no-show.

Aretha Franklin will not be at the service today, CNN is reporting, due to illness.

Tyler Perry, Kevin Costner, Clive Davis and Dionne Warwick are among those scheduled to speak.

JUDGE TO JERRY SANDUSKY: You Can See Your Grandkids... If Parents Consent

Alleged serial child rapist Jerry Sandusky -- former Penn State asst. football coach -- has been cleared by a judge to visit with his grandkids ... as long as the parents are present during the encounter.

The judge also ruled that Sandusky can receive visits from adults.

The judge was clearly feeling generous to the former football coach ... because he also shot down an attempt by prosecutors to have Sandusky confined indoors as he awaits trial due to a fear that he might rape local children.

Sandusky is already on home confinement ... but prosecutors wanted Sandusky locked indoors over fears that he might make an effort to contact kids at an elementary school behind his home.

Seriously, elementary school behind his home. Your stomach turning yet?

But the judge ruled there was not enough evidence to prove Sandusky was making "any effort to contact any of the children by signaling or calling to them, or that he made any gestures directed toward them, or that he acted in any inappropriate way whatsoever."

Sandusky is due back in court in May ... when he will face 52 counts of sexually assaulting boys over a 15-year span.

The Texas Medical Board suspended the license of Dr. Conrad Murray on Friday ... almost three years after the death of Michael Jackson.

Murray is currently serving a 4 year sentence for involuntary manslaughter. The board in Texas did not need to seek an emergency suspension of Murray's license after his conviction, a board spokesperson said, since he was behind bars and not a threat to patients in Texas.

The board spokesperson told the Houston Chronicle, "This achieves the same effect as license revocation."

Murray is seeking an appeal of his conviction.