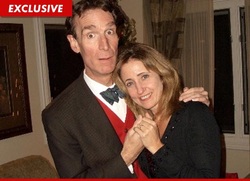 Bill Nye the Science Guy is dragging his ex-girlfriend back to court -- claiming she forced him to rack up $57,000 in attorney's fees by acting like a crazy stalker ... and is now refusing to pay the bill.

According to the docs, it all started back in 2006 after the couple broke up -- Bill claims his ex Blair Tindall stole several expensive items from his house, including his laptop, which she then used to send defamatory emails impersonating him. Bill claims she also poured herbicide on his rose bushes.

Bill sought out a protective order as a result -- and obtained a 6-year injunction against her a few months later, requiring her to stay 100 yards away from him.

According to the new docs, Tindall violated that order in 2009 -- so he went back to court to enforce it ... and racked up a $57,000 legal bill in the process. The court then ordered Blair to cover the damage.

Bill claims she hasn't forked over a penny since -- so now, he's dragging her back to court to get his money.

"Bill Nye was the love of my life. I'm surprised he has taken this action against me.  I have no funds to pay him, and he is a very wealthy man, so I'm not sure where this is coming from."
source tmz.com

Bobby Brown has been battling with Whitney Houston's family over seeing his daughter ever since Whitney passed away last week ... but Bobby won't turn this into a legal battle .

Sources close to the New Edition singer. Bobby really wants to be there forBobbi Kristina, but does not want to make the situation more stressful for her than it already is.

We're told Bobby was very upset with how he was treated at Whitney's funeral yesterday and feels her family should be as considerate to him as his family was to Whitney when Bobby's mother passed away last year.

According to our sources, Bobby won't bring lawyers into the situation and, as on source said, he feels "this sort of thing you let the higher power handle."

DAYTONA BEACH, Fla. -- The start of Sunday's season-opening Daytona 500 was delayed by persistent rain at Daytona International Speedway, endangering the event's streak of never being pushed back a day due to weather.

Light rain fell much of Sunday morning, but let up enough at one point for NASCAR officials to send jet dryers out on the track and revive hopes of the cars rolling off at the scheduled 1:29 p.m. local start time. But as pre-race festivities concluded, the heaviest rain of the day moved in, undoing the work the dryers had already done.

The dryers rolled back out on the track around 1:38 p.m. ET, but were pulled back off fewer than 10 minutes later.

"It's one of those days here in Daytona where it pops up and falls off and pops up and falls off," NASCAR president Mike Helton said on the Fox broadcast. "But as the day progresses, we think the chances of the pop-ups diminish quite a bit. Hopefully this will be the last big cell we see, and things will start falling apart, and we can get the track dry and go on and get finish and run the Daytona 500 today."

The event was in a holding pattern as of early Sunday afternoon, according to NASCAR officials. The 2.5-mile Daytona track takes between two and three hours to dry. The speedway is equipped with lights, and has hosted several Daytona 500s that have ended after dark. Track president Joie Chitwood told an Orlando newspaper recently that the facility was prepared to turn on the lights if needed.

"The Daytona International Speedway has every drying piece of machinery they've got across the country here today," Helton added, "because we know that the fans at home and the fans here in Daytona want to see the race run, and we do, too. The sooner, the better."

The Daytona 500, which began in 1959, has never been pushed back to the next day because of inclement weather or any other reason. It has been shortened by weather four times, most recently in 2009 when Matt Kenseth was the winner of the race.

nyc man hit by a train

A selfless New York City hero struck by a train while saving a drunk filmmaker who stumbled onto the tracks in January died of his injuries. Steven Santiago, 39, died Saturday at Staten Island University Hospital after initially surviving a massive head injury he suffered while saving Jonathan Parisen, 40, from certain death Jan. 8.

Parisen went down onto the Staten Island Railway tracks in New Dorp at around 1:30am local time -- either to grab his shoes or on a drunken lark -- while a train barreled toward the station, authorities said.

The ill-fated hero, who relatives said had just turned his life around, pulled the inebriated man up to the platform, but Santiago was unable to pull himself out of the way in time. The train slammed into Santiago, causing massive head trauma.

Over the past several weeks, Santiago recovered enough to move from the hospital to a long-term rehab, sources said, but he took a tragic turn for the worse Friday night and was returned to the hospital's emergency room.

He died at 3:42am local time Saturday.

To read more on this story, see the New York Post article here.

Demonstrators protesting against the burnings of Korans at a U.S. base in Afghanistan tossed grenades at an American base Sunday in a sixth consecutive day of violence that left seven US troops wounded and two Afghans dead.

Afghan authorities also identified and launched a manhunt for a suspect in the killing of two U.S military advisers -- a lieutenant colonel and a major --  inside an Afghan ministry on Saturday.

The attacks were the latest in six days of violence across the country by Afghans furious at the way some Korans at an American base outside of Kabul were disposed of in a burn pit.

The Koran burning incident has swiftly spiraled out of control leaving dozens of people dead, including four U.S. troops killed by their Afghan counterparts, in a sign of the tenuous nature of the relationship between Afghanistan and the U.S.

In Kunduz province, thousands of demonstrators started out protesting peacefully but then the group turned violent as they tried to enter the district's largest city, said Amanuddin Quriashi, district administrator. People in the crowd fired on police and threw grenades at a U.S. base on the city outskirts, he said.

Seven NATO troops were wounded and one of the protesters was killed when troops fired out from the U.S. base, Quriashi said. Another demonstrator was killed by Afghan police, he added. Provincial police spokesman Sarwar Hussaini confirmed the casualties.

A NATO spokesman said that an explosion occurred outside the base, but that the grenades did not breach its defenses.

"Initial reports indicate that there were no ISAF service member fatalities," said Navy Lt. Cmdr. Brian Badura, referring to NATO's International Security Assistance Force. He declined to comment on whether there were any wounded.

More than 30 people have been killed in clashes since it emerged Tuesday that copies of the Muslim holy book and other religious materials had been thrown into a fire pit used to burn garbage at Bagram Air Field, a large U.S. base north of Kabul.

NATO and the British government recalled their international advisers from Afghan ministries in the capital late Saturday after the two advisers — a lieutenant colonel and a major — were found dead in their office, shot in the back of the head. The names of the victims have not been released.

The main suspect in the shooting is an Afghan man who worked as a driver for an office on the same floor as the advisers' office, Interior Ministry spokesman Sediq Sediqi. He did not provide further details about the man or his possible motive.

"There is a suspect who is an employee of the Interior Ministry. He has been identified. Right now the police are trying to arrest him. He is on the run," the Afghan Interior Ministry said in a statement Sunday, citing initial findings by investigators.

The Taliban claimed that the shooter was one of their sympathizers and that an accomplice had helped him get into the compound to kill the Americans in retaliation for the Koran burnings.

Afghan President Hamid Karzai renewed his calls for calm in a televised address to the nation Sunday.

"Now is the time to return to calm and not let our enemies use this situation," he said. Asked about the unprecedented recall of NATO staff, Karzai said it was understandable.

"It is a temporary step at a time when the people of Afghanistan are angry over the burning of the holy Koran," Karzai said.

Members of the international military coalition described the removal of advisers as a temporary security measure, stressing that they did not expect it to affect partnerships with the Afghans that are key to preparing the country's security forces to take on more responsibility as international troops draw down.

"We continue to move forward and stand by our Afghan partners in this campaign. We will not let this divide the coalition," said Lt. Col. Jimmie Cummings, a spokesman for the international force. The NATO recall affects advisers numbered "in the low hundreds," Cummings said.

Catherine Arnold, a spokeswoman for the British Embassy, said Britain that "as a temporary measure" the embassy has "withdrawn civilian mentors and advisers from institutions within Kabul and that we're keeping the situation under review." She declined to say how many people were affected by the decision.

The U.S. government had already ordered its government advisers to stay inside the secure embassy compound earlier in the week out of fear of retribution, said Gavin Sundwall, a U.S. Embassy spokesman.

President Barack Obama and other U.S. officials have apologized for what they said was a mistake, but their regrets did not quell the anger of Afghans, who viewed the Koran burnings as an illustration of what they perceive as foreign disrespect for their culture and religion.

The shootings of U.S. service members were the latest in a rising number of incidents where Afghan soldiers or policemen, or gunmen wearing their uniforms, have killed NATO forces. Last month, France suspended its training program and threatened to withdraw its forces from Afghanistan a year ahead of schedule after an Afghan soldier shot and killed four French soldiers on a base in the east.