A man wounded Friday when a gunman opened fire at passing vehicles along a downtown street in Hollywood has died, a spokeswoman at Cedars-Sinai Medical
Center in Los Angeles said Monday.John Atterberry died shortly before 5 p.m. Monday, according to Simi Singer, the hospital spokeswoman.The music-industry executive was shot in the jaw at Sunset Boulevard and Vine Street.The gunman, 26-year-old Tyler Brehm, went on the rampage that ended with his being fatally
shot by police, Los Angeles police spokeswoman Sgt. Mitzi Fierro has said.An amateur video captured the scene of Brehm walking down Sunset Boulevard wielding a handgun and firing at vehicles, seemingly at random. Brehm fired a "significant number" of rounds, police said. He then returned to an intersection, where he wasconfronted by a plainclothes police detective and an off-duty police officer working on a nearby movie set, officials said."At that point the police ordered him
to drop his weapon and he pointed his gun at the police and an officer-involved shooting occurred," Fierro said.Brehm died later at a nearby hospital, according to apolice statement.Christopher Johns recorded much of the incident from his apartment window and can be heard shouting at Brehm throughout.Police have not indicated that they know Brehm's motive.wo others suffered minor injuries.
http://www.cnn.com/2011/12/12/justice/california-hollywood-shooting/?hpt=hp_t2 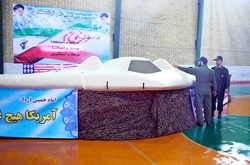 The
Obama administration has sent a formal diplomatic request asking Iran to return
the radar-evading drone aircraft that crashed on a CIA spying mission this
month, but U.S. officials say they don't expect Iran will comply.
"We have asked for it back," Obama said Monday at a news conference in Washington
with Iraqi Prime Minister Nouri Maliki. "We'll see how the Iranians
respond."His
comments marked the first public confirmation that the RQ-170 Sentinel drone now
in Iranian hands is a U.S. aircraft, though U.S. officials privately
acknowledged that in recent days. Iran has claimed it downed the stealthy
surveillance drone, but U.S. officials say it
malfunctioned.Capture
of the futuristic-looking unmanned spy plane has provided Tehran with a
propaganda windfall. The government announced that it planned to clone and mass
produce the bat-winged craft for use against itsenemies.The
embarrassing loss of the CIA drone has focused attention on the use of an air
base in western Afghanistan over the last several years to launch aerial
surveillance missions against suspected nuclear facilities and other targets in
neighboring Iran.Defense
Secretary Leon E. Panetta called the U.S. request for return of the drone
"appropriate," but he acknowledged that Iran's government, which last week
lodged a formal complaint with the United Nations about the U.S. spy plane
violating its airspace, was unlikely to send it
back. "I don't expect that will happen, but I think it's important to make that request,"
Panetta told reporters traveling with him aboard a U.S. military
aircraft.Officials declined to say how the U.S. filed the formal request. Washington doesn't have
diplomatic relations with Tehran, and normally communicates through the Swiss
government. Mark Toner, a State Department spokesman, refused to discuss the
issue, saying he would not comment on intelligence
matters.Iranian state media reported Monday that Iranian experts were recovering valuable data
from the drone, which appeared relatively intact in photographs released by
Iran, and were trying to reverse-engineer its unique
capabilities.Parviz Sarvari, head of the Iranian parliament's national security and foreign policy
committee, said that Iran is "in the final steps of breaking into the aircraft's
secret code.""The findings will be used to support our accusations against the U.S.," Sarvari said
in comments reported by the state-run Al Alam news
channel.  Amir Ali Hajizadeh, who commands the Revolutionary Guard's Aerospace Forces, told the
semiofficial Fars News Agency that the aircraft "was downed in Iran with minimum
damage," according to Israel's Haaretz
newspaper. U.S. officials said they don't believe Iran's scientists can reverse-engineer the
craft's stealth design and skin coating, which help it evade detection on radar.
But they expressed concern that Iran may figure out the drone's flight path, and
thus learn the CIA's surveillance targets inside Iran.U.S.
officials also are concerned that Iran could offer the drone to China or other
U.S. rivals or adversaries that are building their own stealth aircraft,
including drones.Panetta said it was unclear how much Iran could glean from the recovered spy plane, or
what condition it was in.Iran said it downed the drone about 140 miles inside Iran through electronic warfare,
suggesting hacking or signal jamming. U.S. officials say the aircraft
malfunctioned and went down on its own.

Sandusky Scheduled to Face Several of His Accusers

BELLEFONTE,
Pa. — Jerry Sandusky, the disgraced former assistant football coach at Penn
State, is scheduled Tuesday to face the public testimony of at least half of the
10 boys he is accused of sexually molesting. In
a preliminary hearing in this town of 6,100, located about 10 miles northeast of
the Penn State campus, a district judge will determine whether prosecutors have
provided sufficient evidence to send the case to trial. The hearing could last
two days. Sandusky, who will be 68 next month, has been charged with more than 50 counts of sexual
abuse involving 10 boys he met through a nonprofit organization, Second Mile, he
founded in 1977 that worked with disadvantaged children.Sandusky has admitted in interviews, including one with The New York Times, that he
showered and wrestled with young boys as a mentor who treated the youths like
extended family but has said he never sexually abused them.He posted a $250,000 bond and was released from jail last week after facing charges
by two additional accusers. Sandusky is confined to his home and must wear an
ankle monitor. Among the accusers expected to testify at the preliminary hearing
is a 17-year-old known as Victim 1. According to prosecutors, he met Sandusky
when he was 11 or 12 and was given gifts like golf clubs, a computer and cash
and taken to professional and college sporting events. The boy was also
victimized repeatedly in Sandusky’s home, prosecutors said.The molestation
charges have brought perhaps the greatest scandal ever witnessed in college
sports. Forced out at Penn State were its longtime football coach Joe Paterno
and the university president, Graham B. Spanier. Athletic Director Tim Curley
and the university vice president Gary Schultz, who was in charge of the campus
police, have been accused of lying to a grand jury. Until now, Bellefonte, where the Centre County Courthouse is located on the town
square, has been a sleepy place known for its Victorian architecture and as the
home to five Pennsylvania governors from the 1800s. But about 200 members of the
news media were expected to cover the preliminary hearing. On Monday night,
traffic on the town square was closed pending the arrival of 29 television
satellite trucks.