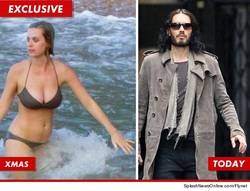 Katy Perry and Russell Brand have not decided to end their marriage ... this according to multiple sources directly connected to the couple.

We are told, however, that they are having problems, but our sources say it has nothing to do with reports of a big, blowout argument ... because we're told no such argument ever occurred.

Russell was spotted out in London today ... again without his wedding ring. He wasn't wearing it yesterday either.

As for Katy not wearing her ring, we're told it's no big deal.  As one source notes, she doesn't wear the ring when she performs ... and it has nothing to do with Russell or her marriage.

One of our sources says it's clear Katy and Russell are "dealing with something," but divorce court is not the end game ... at least not yet.

Texas Rep. Ron Paul has distanced himself from a series of controversial newsletters from the 1980s and 1990s that bore his name and included inflammatory and racially charged language.

As the newsletters burst into view, first during his 2008 presidential bid and again in recent weeks after he climbed to the front of the Republican race in Iowa, Paul has blamed the writings on ghostwriters. He said he was not aware of the "bad stuff," as he described it.

But one of Paul's own books, published solely under his name, contains several passages that could be problematic as he attempts to push his libertarian message into the political mainstream.

In his 1987 manifesto "Freedom Under Siege: The U.S. Constitution after 200-Plus Years," Paul wrote that AIDS patients were victims of their own lifestyle, questioned the rights of minorities and argued that people who are sexually harassed at work should quit their jobs.

The slim, 157-page volume was published ahead of Paul's 1988 Libertarian Party presidential bid and touches on many of the themes he continues to hammer on the stump.

Returning again and again to the of concept of "liberty," he hails the virtues of the gold standard, attacks the Federal Reserve and defends the rights of gun-owners.

But the book, re-issued in 2007 during Paul's last presidential bid with a cover photograph of an ominous SWAT Team, has so far escaped scrutiny amid the latest furor over his newsletters.

In one section of the book, Paul criticized people suffering from AIDS or other contagious diseases for demanding health insurance coverage.

"The individual suffering from AIDS certainly is a victim - frequently a victim of his own lifestyle - but this same individual victimizes innocent citizens by forcing them to pay for his care," Paul wrote.

In another chapter on the rights of individuals outside of government – the central theme of Paul's libertarian philosophy - he sharply criticized the "absurdity" of politicians who try to bestow differing rights on various social and ethnic groups.

It's dangerous to craft a separate set of rights for groups like Hispanics, African-Americans, children, employees and the homeless, Paul wrote.

"Until all these terms are dropped and we recognize that only an individual has rights the solution to the mess in which we find ourselves will not be found," Paul explained.

"Every year new groups organize to demand their 'rights,'" he continued. "White people who organize and expect the same attention as other groups are quickly and viciously condemned as dangerous bigots. Hispanic, black, and Jewish caucuses can exist in the U.S. Congress, but not a white caucus, demonstrating the absurdity of this approach for achieving rights for everyone."

Paul also defended the rights of an individual to "control property and run his or her business as he or she chooses," without interference from "the social do-gooder."

In a passage first flagged by the Houston Chronicle in 2007, Paul then claimed that sexual harassment should not be a violation of one's employment rights.

"Employee rights are said to be valid when employers pressure employees into sexual activity," Paul wrote. "Why don't they quit once the so-called harassment starts? Obviously the morals of the harasser cannot be defended, but how can the harassee escape some responsibility for the problem? Seeking protection under civil rights legislation is hardly acceptable."

Paul's campaign manager Jesse Benton defended the book and said the candidate "has been speaking out for decades that rights do not come from belonging to a group."

"Rights come because we are all individuals, endowed by our creator, and Americans must look beyond race or creed and recognize that we all deserving of the same Liberty," Benton told CNN in an email. "This truth is a tenant of natural law and the only way we will achieve a color blind and truly free society."