CARLOS MENCIA Comedy Is HARDER When You Lose the Fat

Carlos Mencia knows that fat is funny -- and dropping 70 lbs can be a career killer for a comedian -- but this weekend, the comic found a way to make skinny work ... with the help of a little person.

A slimmed-down Mencia was telling us all about the weight loss at The Improv in L.A. ... when his former "Mind of Mencia" co-star Little Brad stopped by.

Mencia -- pointing to his pal -- told us, "We wear the same size shirt" ... adding, "I'll show you that I fit in a dwarf shirt now." The two proceeded to swap tops ... right in the middle of the street.

He added, "I don't know if this is cool or pathetic."

Check out the footage -- you be the judge - video 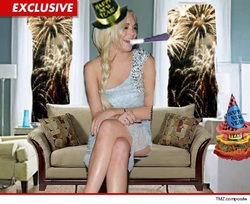 Lindsay Lohan is adamant ... there's no way in hell she's gonna blow the progress she's made with her judge just to count backwards from ten.

Sources close to the actress tell TMZ ... she's gotten a bunch of offers to host various ragers on NYE ... but she's turned down every last one.

We're told Lindsay is desperately trying to change her party girl image ... and she feels staying out of the NYE madness is a major step in the right direction.

Lohan's decision is a costly one -- some stars have raked in 6-figure checks for partying on New Year's Eve.  But we're told Lindsay -- who received high marks from the judge just earlier this month -- doesn't think a check would be worth it.

Lindsay plans to ring in 2012 with a few close friends at her home ... although she may go out to dinner before the final countdown.

Should old acquaintance be forgot