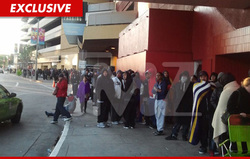 From Baltimore to Washington to Atlanta ... people waiting in lines for the new Nike Air Jordan shoe are getting CRAZY violent -- except at the Beverly Center in Los Angeles where PATIENCE IS RUNNING RAMPANT!!

TMZ spoke with several people at the Bev Center who have been waiting in line for hours ... and some for days ... and they all seem to say the same thing -- it's been cold, but everyone has been extremely cordial.

It seems to be a sharp contrast from other shoe lines across the country -- so far, there have been reports of pepper spraying at a mall in Washington, a brawl in Kentucky and girl fights in North Carolina.
(picture of the shoe at this link) 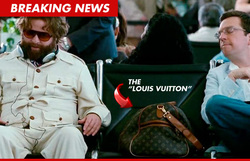 The fine folks at Louis Vuitton are suing Warner Bros. for using knockoff L.V. luggage in Hangover II ... and they want the movie pulled until the scene is removed.

The movie features Zach Galifianakis' character -- Alan -- instructing Stu not to mess with his luggage, warning, "Careful, that is ... that is a Louis Vuitton." BTW, in the movie, the S in Louis is not silent. Funny.

Two problems. First, L.V. claims Warner Bros. never got permission to use its precious and valuable trademark. Second, the luggage in the movie is a knockoff, or so LV claims. Again, funny but problematic.

Louis Vuitton wants damages, and an injunction prohibiting Warner Bros. from distributing the movie as long as the luggage is in the flick.

No word from Warner Bros. yet. Seems we're the only ones working today.