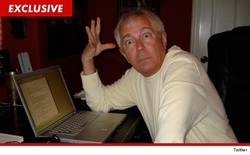 Former "Saturday Night Live" staff writer Joe Bodolai -- who co-wrote the first draft of the movie "Wayne's World" -- has died ... and cops believe the death was a suicide.

TMZ has learned ... Bodolai's body was discovered yesterday by a cleaning crew at an L.A. hotel.

Law enforcement sources tell us ... Bodolai had been staying at the hotel for more than a week.

We're told cops recovered a bottle of antifreeze and Gatorade in the hotel room ... and it's likely his death was due to consumption of the toxic chemical.

Bodolai had posted what appears to be a suicide note on his blog on December 23 titled, "If This Was Your Last Day Alive What Would You Do?"

In the note, Bodolai writes about "Stuff I Would Like to Have Seen In My Life" -- including the Browns winning the Super Bowl and the "truth" about the JFK murder.

He also lists "Things I Regret" ... which begins with, "My inability to conquer my alcoholism" followed by, "The things I did because of it."

Bodolai also lists, "Things I Am Proud Of" -- listing family members, his time as an "SNL" staff writer and "writing the first draft of Wayne’s World with Mike Myers."

Bodolai concludes, "May you all have the happy lives you deserve. Thank you all for being in my life."